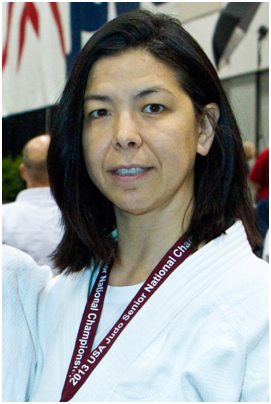 We are honored to have world class competitor and kata instructor, Diane Tamai Jackson, leading our kata instruction. She continues to compete on the world stage in various katas. Diane Tamai Jackson, currently a godan, began judo at age seven. Her first sensei was her father, Ken Tamai, at the Hui-o judo club in Maryland, and she grew up competing in shiai. As an adult, she has been a member of over ten US teams in international judo kata competition, including the Kodokan International Kata Invitational, Cuban Olympics, Pan American Championships, and four World Judo Kata Championships. She has also won multiple medals in kata at the open World Masters Judo Championships. Diane was most recently the 2016 Ju-no-kata Pan-American gold medalist in 2015 & 2016 kata grand champion in the mixed division at the Senior National Championships. Diane is an active volunteer for judo, as a National-level referee, National-level kata judge, member of the Shufu region Board of Examiners, Chair of the Kata Committee for the Shufu region, and an assistant instructor at Hui-o judo club in Beltsville, Maryland. “I loved shiai growing up and I still love shiai. I learned confidence, compassion and perseverance, in judo and in life. But my understanding and appreciation for judo expands as I study the katas. As a young student, I never dreamed of competing at the Kodokan for the USA, but I was fortunate to have that opportunity in 2007 competing in the Kodokan International Kata Invitational. Judo is truly a life-long journey.“