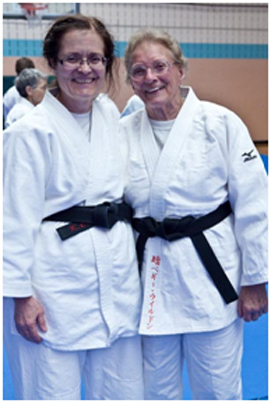 This is a personal reminiscence. I am going from memory. Some details may be vague, or a little off.

When I joined the Washington Judo Club in 1968, or maybe soon after, I met the Whildens, all on the judo mat. Mr. and Mrs. Whilden — the late W.H. Whilden and Peggy Whilden — did judo, as did their young sons Mark and Richard. I was 9, Richard was very slightly older, and Mark was a little older than Richard.

Through the years, it was Peggy who stayed most active in judo. Her passion was kata. I believe it still is her passion. Her son Richard had the good sense to marry Karen, a judoka from the West Coast who also has a passion for kata. I don’t know how Karen and Richard met, but I’m pretty sure Peggy had something to do with it.

Peggy remained a kata competitor well past the age at which most of us compete in any physical activity. People who are more involved in kata can correct me if I’m wrong, but I believe Peggy competed well into her 70s (with much success!).

After competing, Peggy became a leading National kata official. She is about as quiet as they come, but quiet leaders have a place in judo!

Shiai is not Peggy’s or her daughter-in-law’s passion, but they are major supporters of shiai judo too. Both locally and nationally, various Whildens (including Peggy, Karen, and Richard) have worked tirelessly as technical officials, an essential service to judo yet one that almost never results in any positive recognition.

The other day, I posted something about the accomplishments of Edwin Takemori. I said I hoped to post about other senior Sensei in Shufu. I’m sure I haven’t done justice to Peggy Whilden, but I am pleased to salute her accomplishments and contributions..

Peggy is currently a Godan in Shufu Yudanshakai and is a member of Hui-O –Judo in Beltsville. She taught judo in her high school PE classes for 16 years.  Mrs Whilden was in the Washington Judo club in the early 70’s then moved to the Baltimore Judo Club and is now a member of Hui-O . I could read you a very long list of accomplishments and awards she ahs earned over the last four decades but it would take much too long. Over the last 40 plus years she has competed in the US Nationals, World Masters and the Pan Am Championships. She partnered with Gloria Smith, Phyllis Drescher and Karen Whilden. For her active 30 years of competition she was ranked number 1 in Ju No Kata and Katame no Kata. She “retired” from active completion in 2004. Since then she continues to contribute to the judo community as a certified “A” level judge in six of the katas at most of the major judo events, has always attended the famed “Joshi Camp”, has been a judge at the World Masters, continues to teach kata clinics around the country and so much more. Mrs Whilden continues to inspire us with her dedication to judo.