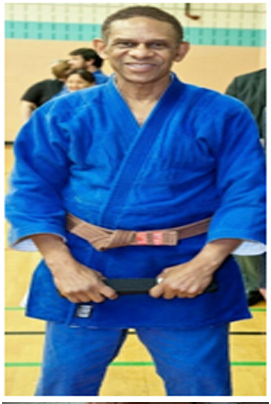 Mr. Brown maintains an extensive schedule on commitments in Shufu Yudanshakai.  Most notably, he is listed as an assistant instructor, and he is enamored with expertise and legacy at Hui-O Judo.  In his instruction, he uses Ki Haku that is spirit, vigor and will power in Judo.  As a result, he achieves self-esteem through free-play, Randori.

Moreover, Mr. Brown is accomplished with maintaining and developing his skill, knowledge and ability.  Frequently, he attends tournaments, and participates in Shufu Board Meetings.  Further, he practices at DC Judo, Sensei Terence McPartland, because he has an affinity to out-reach beyond the college campus.  Equally important, he is a local referee.

Mr. Brown brings not only his background and training in an Olympic Sport but his skill, knowledge and ability cultivated over four decades.

Mr. Brown is available in Baltimore – Washington and New York Metropolitan areas.  Based on an understanding of athletics and academics, a familiarity with sport judo, and proven commitment to service, he has been beneficial to many dojos.  It looks like a plan and he is sure he could help make it even better.